I love my Google Chromecast, it’s been my go-to device for playing videos via YouTube and music via Google’s Play Music Android app. When not using the Chromecast at home, I usually tend to listen to music via MPD and ncmpcpp on my Linux system.

The natural thing to do then was playing my locally stored music using mpd/ncmpcpp and then ‘casting’ it to the Chromecast which is connected to my TV and sound system.

Enter pulseaudio-dlna which is a streaming server that brings DLNA/UPNP support to Pulseaudio and Linux.

As I am on ArchLinux, the software package is available in the AUR and after installing it, the service needs to be started either in the background or in a terminal and then the audio source needs to be changed in pavucontrol as shown below: 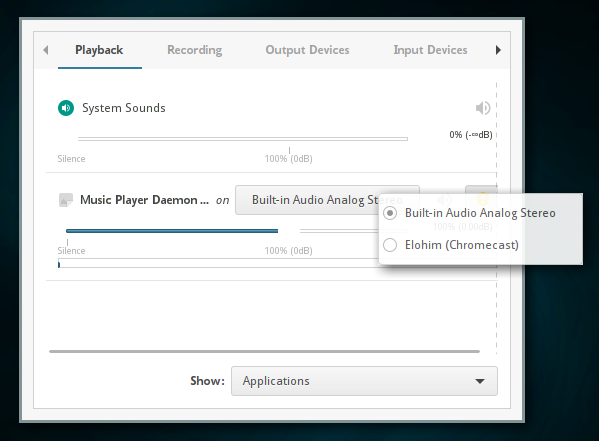 After changing the audio output sink in pavucontrol, Chromecast should automatically pick up the audio sound.

One thing that it doesn’t do is show the song information on Chromecast but that is trivial, I’m just happy to be able to play my local songs via MPD on the Chromecast.